In the magical world of desserts

As children, we all dreamed of having a candy house. Only few will build a house, open their doors to everyone and become a must-visit destination. This is what the Vincek family have succeeded in doing: in 40 years, the family-owned company Vincek changed the cake and pastry image of Zagreb. The Vincek cake and pastry shop was the first to offer the famous Zagreb custard slices topped with whipped cream and high-quality chocolate.

Since it was founded in 1977, Vincek has been continually investing in its production processes, shops and employees, gradually becoming the leading Croatian cakery brand. In 40 years of existence, the small family business started by the spouses Ankica and Stjepan Vincek has become the leading Croatian producer of pastries, cakes, fancy biscuits, chestnut puree, ice cream and other unique delicacies to order.

Continuous investment into product quality and the use of only the best local ingredients and highest production standards - this was recognized by numerous customers who visit Vincek shops on a daily basis.

The shops maintain the freshness and natural flavour of the highest-quality ingredients by using state-of-the-art display cabinets. Vincek''''s production and business operations meet the highest standards and HACCP norms. You are assured to always purchase a safe product meeting highest quality standards.

Vincek, which started its cake and pastry-making mission by opening a small shop at the Zvonimirova street, now employs more than 100 people and has 6 shops in Zagreb.

All Vincek products bear the Richemont mark for excellence in bakery and confectionery awarded by the Richemont club - an association of experts in bakery and confectionery. Our products were awarded numerous other awards and recognitions for quality. The excellence of our products is known beyond Croatian borders - Vincek won an award at the Spanish 36th International Award For Tourist, Hotel and Catering Industry in 2011. Vincek has participated in all bakers'''' and master pastry chefs'''' competitions, the most significant of those being the Golden Hands competition organized by the Richemont club, and has regularly won the highest awards. Apart from competition awards, Vincek has also won numerous entrepreneurship awards: the Golden Hands award for 30 years of successful business from the Croatian Chamber of Economy in 2007 and the Golden Statue for successful work and trades and crafts achievements from the Croatian Chamber of Trades and Crafts in 2009. It bears the Superbrands quality mark for 2011/2012. 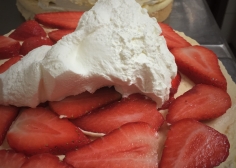